The ASBCI has recently launched a new online publication, InAssociation.

As members of the ASBCI we regularly work together on content and articles for their publications.

In the latest issue, our Technical Services Expert for Soft goods Helen Colebourn, wrote an article on Vegan testing and the importance of proving products are 100% vegan. 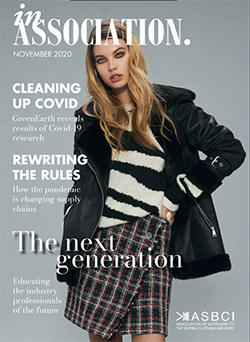 The Rise of Veganism

With the increase in vegan related fashion, the need for proving that a product does not contain any animal related produce is now more important than ever. Helen Colebourn, Softlines Technical Consultant at Bureau Veritas Consumer Products Services, Warrington.

According to a study by The Vegan Society, the number of vegans in the UK has quadrupled between 2014 and 2019. In 2018, the UK launched more vegan products than any nation and in 2019, Brighton was found to be the easiest area of the UK to be vegan. Waterstones have 9,030 book titles with the word 'vegan' in them available for sale (as of December 2019) compared to 944 in August 2018 and orders of vegan meals grew 388% between 2016 and 2018 making them the UK’s fastest growing takeaway choice. All this suggests that veganism is more than just a fad and is here to stay.

While primarily veganism has been associated with diet, it is a total lifestyle choice and requires the newly initiated to examine all aspects of their existence regarding how they interact with animals. This obviously also includes their immediate surroundings and the clothes they wear.

So why the dramatic increase over recent times?

There are a number of reasons.

The innovation of vegan products has meant more availability to the consumer, taking away the endless search for animal friendly product and also introducing it to a new market who may not have necessarily been seeking it! As consumers we are more and more conscious of our health and the environment around us. We are constantly made aware of the issues within the food chain when farming meat, whether it be deforestation or factory farming practices.

All in all, the image of veganism as being pulse and bean eating individuals wearing handwoven hemp clothing has long gone and as more fashion brands embrace this new market and see it’s potential growth the range of products is quickly increasing. With the increase in new clothing ranges specific to the vegan market, proving these items are 100% vegan friendly, has also increased. When products such as shoes where there are multiple components and adhesives used, making the claim of a vegan product needs to be proven.

The whole birth of synthetic fibres came about essentially to provide an easier care and possibly cheaper alternative to natural fibres. Nylon was developed to imitate silk and has since been engineered into a variety of fabric bases. While it is more established to produce vegan materials from hydrocarbon based synthetic fibres, this is not an environmentally good solution long term and so most major brands now offer animal-free leather made from many different materials  including microfibers from recycled synthetic fibres such as nylon, and plants and fungi.

Biofabricated Leathers such as Modern Meadow’s ZoaTM, is one of the first generation of materials using yeast fermentation to produce collagen competitively and on an industrial scale. Along with Mushroom leathers such as Muskin, they provide a very stable, flexible and robust vegan alternative to traditional leathers. They look generally like cowhide and could replace it altogether theoretically.

Pinatex is an innovative natural textile made from waste pineapple leaf fibre which can also be used to substitute leather. The leaves are a by-product from existing pineapple harvests and so the raw material requires no additional environmental resources to produce.

Developments such as these are creating viable alternatives to animal products for materials, but often traces of animal proteins can be found in other areas of products labelled as vegan. One such example is the adhesives often used in footwear which are equine in source and often not on the radar of the unsuspecting buyer.

Bureau Veritas along with our partner AMS lab have developed a range of tests with PETA (People for the Ethical Treatment of Animals). These tests allow a brand or retailers to properly test their products and label them as 100% vegan. We can test all elements of clothing and footwear and identify each products used, check for cross contamination during the manufacturing process and confirm if a product is in fact 100% vegan.

We have produced a webinar specific for vegan product testing which is available to view, along with our complete collection of webinars here

Our webinar library is available to registered users, if you do not have a username and password, please register and we will approve your application within 24 working hours.